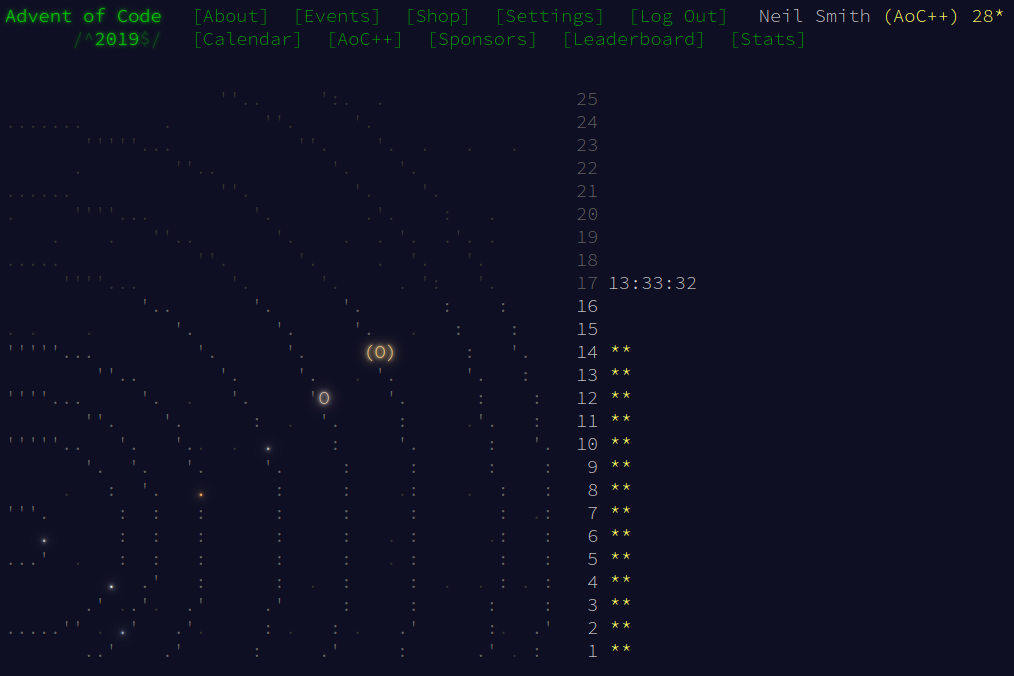 Day 14 took a bit of thought about the best way to tackle it, but I eventually took inspiration from blackboard systems. The key data structure was a Map of required production of each chemical. A positive number of required indicates how many molecules still need to be created; a negative number show how much excess of a molecule is around, produced but unused.

Initially, the required map contains just the one element of fuel required. The reaction rules were also stored in a map, keyed by the chemical that was produced by that reaction. Finally, reagents in a reaction were stored as a chemical name and number of molecules.

The input structure was more complex than just a comma-separated list of numbers, so it showed off the abilities of the parser rather well, I thought.

The parser started by giving some names for parts of the reaction rules.

Given those, the parser proper is just these four statements:

together with the auxiliary function mkReactions, which folds a list of reactions into a map.

The production plan started by stating the requirement for one fuel. It then proceeds by picking a required chemical (arbitrarily), finding the reaction that produces it, and running that reaction.

When there's a lot of a chemical that needs producing, the applications value shows how many times the reaction can be run; a reaction must be run at least once if the product is required. (I didn't need to count applications for part 1; just doing a single run of a reaction at a time was sufficient. But I needed it for part 2!)

The nonOre implements the exception that ORE never needs to be produced.

addRequirement adds all the reagents to the required map, taking account of any existing requirements for that chemical.

The whole thing is triggered by oreForFuel, which calculates the amount of ore required for a particular amount of fuel.

This was a binary search of the fuel amount. I guessed a lower limit on the amount of fuel based on the ore requirement for a single unit of fuel. I guessed an upper limit as powers of two times that, picking the first that required more ore than was available.

Given a sensible upper and lower bound, the binary search of the maximal fuel amount could begin. It's a relatively standard search, but with some fiddling around to ensure that it always returns a valid amount of fuel.

The code is available (and on Github).