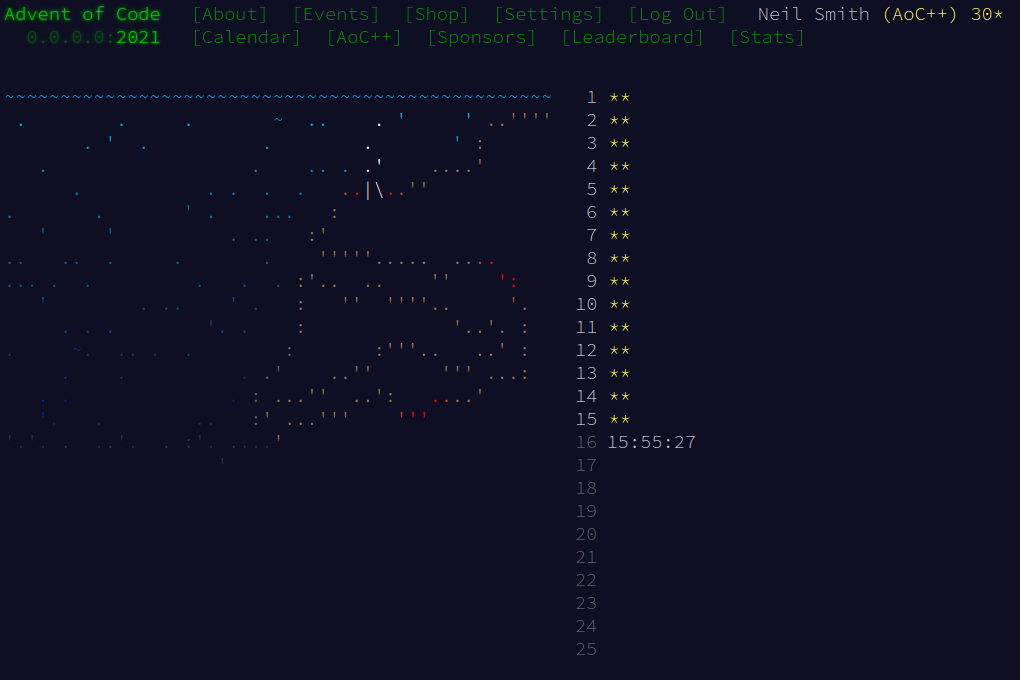 Day 15 was a standard graph search, so I reused some old code from day 20 of the 2019 Advent of Code. There are some advantages to doing lots of these!

This program uses several "non-beginner" tools in the code which are worth mentioning.

One is the use of the lens library to tidy up some of the record manipulation steps, such as candidate = agendum ^. current to pull out the current field from the agendum record. It's probably overkill, and I'd probably use Record Wildcards if I were writing this now.

Another is the use of the Reader monad to tidy up the code. Everything in the program depends on the detail of the grid being explored. That means I need to feed that in at the root of the function call tree, but it's only used in a few functions at the leaves of the call tree. Using the Reader allows me to hide some of the plumbing of many functions receiving a grid parameter only to pass it unchanged to the functions it calls.

The feature I exploit the most here is type classes. The two parts of today's puzzle differ in how the starting grid and current position are interpreted (with the part 2 grid being several duplicates of the grid in part 1). I could have done that by just building a larger grid and reusing the same code in part 1, or I could use the information in the original to create a "virtual grid" for part 2. Type classes allowed me to do the latter.

I won't describe the A* search algorithm here, just show how I implemented it.

I represent the map as an Array of positions, each with an Int cost. There are three flavours of Position used. BasePosition is the position used when reading the input and for locations in the Grid data structures. A Position is the same, but used in part 1. A TiledPosition is a position in the larger, tiled, version of the map. A TiledPosition can be anywhere in the larger, virtual, version of the map. But more on that in a bit. Finally, a Cave is a grid and an explicit goal location and it has a context for the Reader.

The search is controlled by each current solution candidate being an Agendum, and the whole search controlled by the Agenda, a priority queue of Agendums. I also have a closed set of ExploredStates. Note how these take a type parameter, the type of the current states. In this case, that's either a Position or a TiledPosition.

The search algorithm is pretty standard. runReader sets off searchCave in the context of a cave. aStar does the search as described, including checking for reaching the goal, checking for membership of the closed set, and updating the agenda. candidates finds the possible next steps from an Agendum, and makeAgendum converts each candidate into an Agendum.

You'll notice that these functions don't look at any specifics of the grid itself, using functions like successors and entryCost to do that.

Those grid-specific details are handled by functions in the SearchState class.

Each SeachState type, Position and TiledPosition, has its own version of these functions. Haskell uses the concrete type to determine which function to use.

This function works out which tile the position is in, and where in that tile, and uses that to calculate the updated cost.

The last thing to cover is the profiling. My original version of the code for part 2 took about two minutes to run.

I profiled the runtime of the program and found that entryCost was taking about 50% of the runtime, with another 40% in makeAgendum. A little bit of thinking showed why. My original version of the Agendum record was this:

where _cost is the estimated total cost and the incurred cost was recalculated from the _trail every time a new Agendum was created. That led to a lot of lookups in the grid! A small change to Agendum (to retain the incurred trail cost) and suddenly the runtime dropped from two minutes to under five seconds.

You can see the original version as advent15/src/MainSlow.hs.