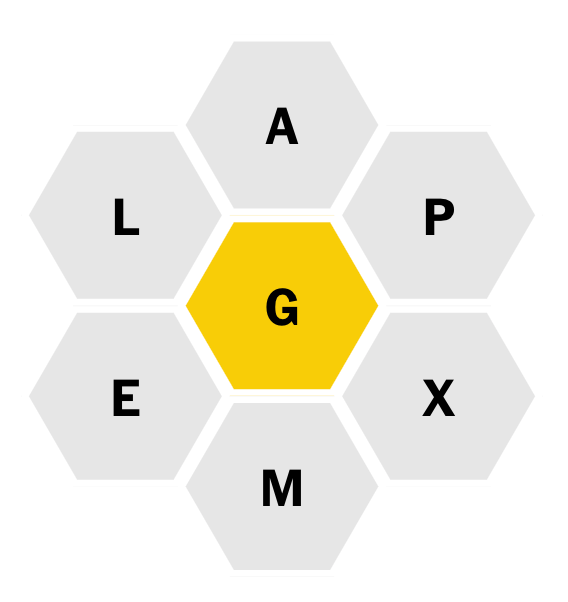 A little late to the day, but I eventually got around to addressing this "honeycomb puzzle" challenge. It's a simple puzzle, but there's scope for a little bit of optimisation.

In this part, I solve the puzzle. In part 2, I look at a couple of optimisations for it.

The goal is to identify as many words that meet the following criteria:

The challenge is to find the honeycomb that gives the highest score (using a vocabulary from a cached version of the Enable word list), but with restrictions that the honeycomb not contain any duplicate letters (why would you?), cannot contain the letter "S", and must contain at least one pangram.

That's the challenge, let's go about solving it.

I'll do that in both Python and Haskell. The approach, algorithms, and data structures are the same in both versions, even if the surface level syntax is different.

In both Python and Haskell, I need to import a few libraries.

Haskell uses some standard libraries, including the containers library for sets and maps.

Being a bit more precise, I can make a word from a honeycomb if

From the definition of "is a word present in a honeycomb", it follows that a honeycomb is something that has a set of letters and a mandatory letter. Let's define that.

In Python, I'll use a dataclass, which I'll make immutable (frozen):

(I also define __repr__ to pretty-print honeycombs if need be.)

In Haskell, it's an algebraic data type (and a type alias for convenience):

Given a honeycomb, a word is present in that honeycomb given the two conditions above. They're directly translated into code.

This is basic file reading (and a new type synonym for Haskell). There are a couple of constraints we can apply at this point, which rule out three classes of words:

This is enough to check which words are in any given honeycomb. But I want to build the word sets, to help me check many honeycombs.

In Python, this looks like iterating over the list of words, inserting each word as I go. I use a collections.defaultdict as the data structure, as that makes it easier to insert each word (we assume there's always a set of words for each key, regardless of whether we've we've see the key before).

In Haskell, I'm folding the words into the map, starting with an empty map. I use the the insertWith function to add words to the map.

Note that there's a fair bit of partial application in this definition. addWord has type String -> WordSet -> WordSet and uses union to combine this word (as a singleton set) with the existing words (if any).

I end up being able to feed a key of word_sets into present and that will tell me if those words can be made with that honeycomb.

The end goal is to find the highest-scoring honeycomb. That means I'll be presenting lots of word sets to lots of honeycombs and then scoring them. But each set of words has the same score each time it's present, so I can save time by calculating the score for a set of letters and store that score.

I'll follow the scoring rules as given. A four-letter word scores 1 point. Longer words score their length. If all seven letters are used, score a bonus 7 points. We wrap those rules in a function that, when given a set of letters, finds the words that can be made from that set, finds the score for each word, and returns the sum of all scores.

For Python, I use a comprehension to transform the word_sets to scored_sets, and note how the global variable word_sets is accessed inside score.

For Haskell, first I define a new type for scored letter sets, and I convert a WordSet to a ScoredSet by using mapWithKey to convert each set of letters to a score..

The function scoreLetterSet is given a set of letters and the words can can be made from it. It finds the score for each word and adds them up (by using a fold to combine the scores for each word).

The Python method to score a honeycomb uses the iterator interface to walk over the scored_sets dictionary, filter them by whether letters are present in the honeycomb, then sum the scores.

I could do something similar in Haskell, using a filter to find just the letter sets that are present in the honeycomb, then summing their scores. But really what we're doing is a fold, combining the elements of the scored letter set map into a single value (the overall score); the wrinkle here is that the combining function uses the value of the key to decide if this letter set's score should be included in the total.

I'm now in a position to solve the original problem, that of finding the honeycomb with the best score (from the dictionary I have). How can I find the honeycombs to test?

One approach is to find all seven-letter subsets of the alphabet and, for each of those, build the seven possible honeycombs. This gives

But the puzzle description says I'm after a honeycomb where every letter is used, which means I can base our honeycombs on those letter sets. There are 14,741 words with seven distinct letters, grouped into 7986 distinct groups. That means there are only 55,902 distinct honeycombs to investigate.

Now I know all the plausible honeycombs, and can find the score for each, I can find the honeycomb with the best score. In Python, it's easy using the built-in max function:

In Haskell, I have to build our own version of max that operates over the Set of honeycombs, using foldr to combine the honeycombs into just the one with the best score.

And the best honeycomb is...

Thankfully, both programs agree on the best honeycomb and its score!

The bad news is that this takes a long time: about 5½ minutes for Python, and 4 minutes for Haskell. That's far too long. In the next part, I'll look at a couple of ways to optimise these programs.