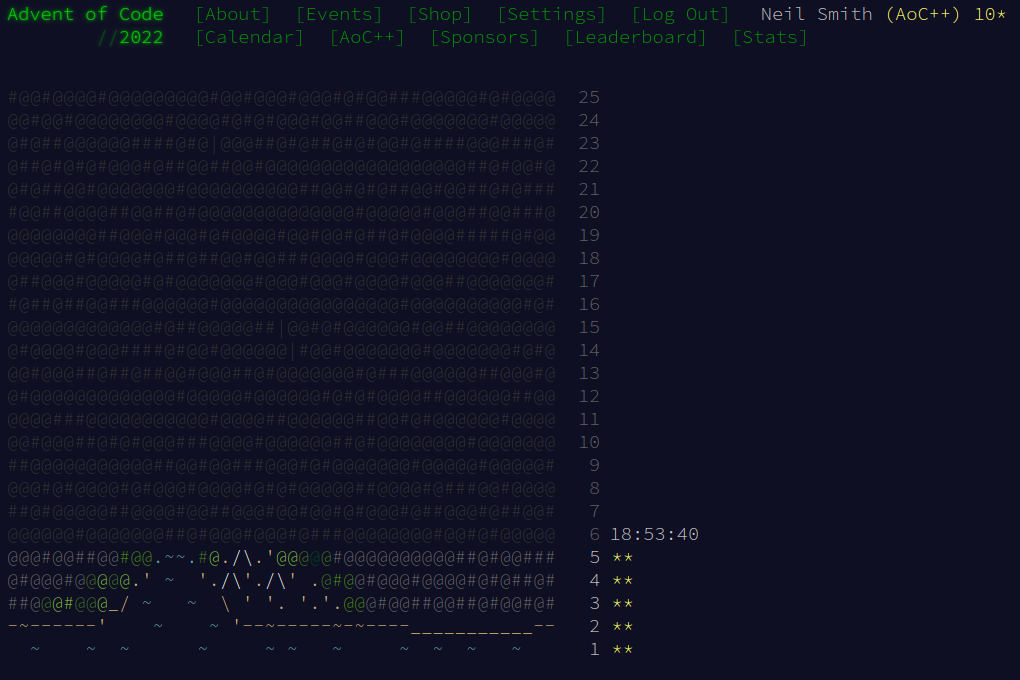 Day 5 was an adventure in parsing! Luckily, my old faithful attoparsec was up to the job.

The first thing was to sort out the representation. The Move was a new agebraic data type, essentially a triple of <quantity, from, to>. A Crate held its name. Each stack of crates was held as a list, with the topmost crate being the head of the list. The Wharf was an IntMap [Crate] from integer position to the stack of crates at that position.

Parsing the input was the hardest part of the puzzle, but it was mainly a case of follow the structure.

The picture of the crates was the hard bit. I had to parse it in the order it appears in the file: row by row. But I wanted to end up with the crates column-by-column to I could store each stack in the Wharf. Luckily, switching between rows and columns is handled by transpose. But how to read the rows? And how to keep track of the blank spaces between the tallest few stacks?

If we imagine the picture is a grid of positions, each place in the grid is either occupied by a Crate or is empty. In other words, each row is a list of Maybe Crate.

That gave me the parser.

Working from the bottom up, a Crate is a letter between square brackets. A blank is three spaces. Each cell in the picture is either a crate or blank. Each line of the picture is a bunch of cells separated by spaces (and at least one cell).

Meanwhile, the stack label row is some whitespace, then some numbers separated by spaces, then some more whitespace. (Note that this consumes the newlines before and after this line.)

The wharf as a whole is a bunch of picture lines along with the label row.

Parsing the moves is easy in comparison. The moves are separated by newlines, and each move is some text delimiting the three numbers we want. Finally, the problem description is the wharf followed by the moves.

Then, to convert the output of the parser into the Wharf. I do this in three stages:

There are two ways of moving crates around, so there are two sets of functions to perform them. In each case, applying a bunch of moves is a foldl , folding each move into a wharf to create a new wharf. (It has to be done from the left, to preserve the order of operations.)

Part 2 is easier to explain.

A single move, moving a substack of crates from place to place, is done by applyMove2. It finds the crates at the origin, finds the substack to move, finds the existing stack at the destination, then updates the origin and destination stacks. Applying the sequence of moves is the fold.

The moves in part 1 is the same pattern, but applying a single move instruction is itself the repeated application of a move 1 from here to there, so that requires an additional level of fold. I use replicate to generate the list of single-move steps from the one move instruction.

All that's left is a convenience function to extract the names of the top crates on the wharf.