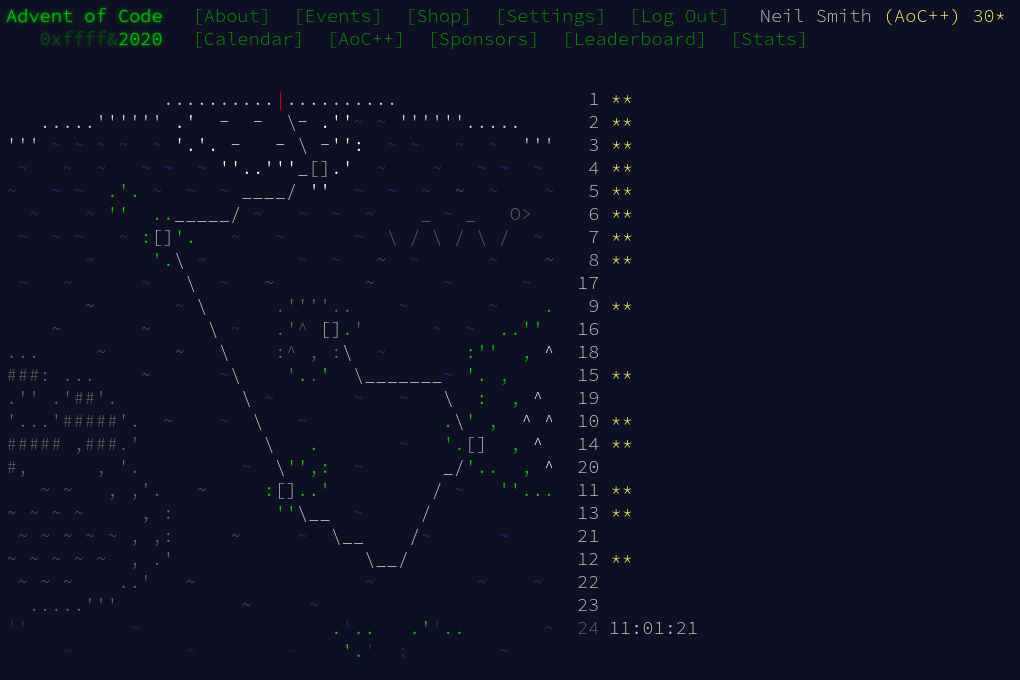 Day 15 started as a fiddle with off-by-one errors, then dived into the detail of the ST monad, mutable values, and Control.Monad.Loops for control structures.

The problem was the same in both parts, but different sizes. The instance in part 1 was small enough for a pure functional version to be quick enough, but part 2 required mutable storage to be quick.

Progress in the game was built around the Game record. This records the state of the game at the end of a particular round. round is the number of the round just finished; word is the word/number spoken this round; history is the history of what was spoken in previous rounds.

I create a game from the seed string, taking care not to include the current round in the history.

To find the desired state, I iterate to create an infinite list of states, and drop them while I'm notYet finished.

And then call that from main

This version is available as advent15slow.hs.

This solution works for part 2, but it takes about 6 minutes to complete the 30,000,000 rounds. I may have been satisfied with that, but I've been keeping an eye on Michael Wong's blog, and his solution to day 15 was quick, by using mutable storage in the ST monad. He's a beginner, and I'd never done anything with ST before, so… challenge accepted!

This version revolves around three mutable variables, round, word, and history. The first two are Ints, the last is Vector of Ints.

The s state in the type signatures is just to enforce the encapsulation of the mutation to the ST monad's scope. It's not used anywhere and you don't define it.

This is all called with runGame, which sets up the ST monad to allow the mutability, seeds the game, runs it, then looks up the final word from the mutable variable.

How depressingly imperative. It does, however, complete in less than two seconds.

This version is available as advent15.hs.

That mixing of update and termination checking in gameSteps slightly bothered me, so I took a look at the Control.Monad.Loops library. Unfortunately, the documentation there is terse, to say the least. But I did find a nice post looking at the library, which was a great help.

I can simplify gameSteps into gameStep, that just does one game update.

Control of this is handled in gameLoop. whileM_ takes two monadic expressions. The first returns an ST s Bool and determines whether the loop should continue. The second is the body of the loop.

There's an alternative version using untilM_, but with the same two monadic expressions.

It's a matter of taste as to which one is clearer.

This version is available as advent15loop.hs, including a number of ways of writing gameLoop as comments.