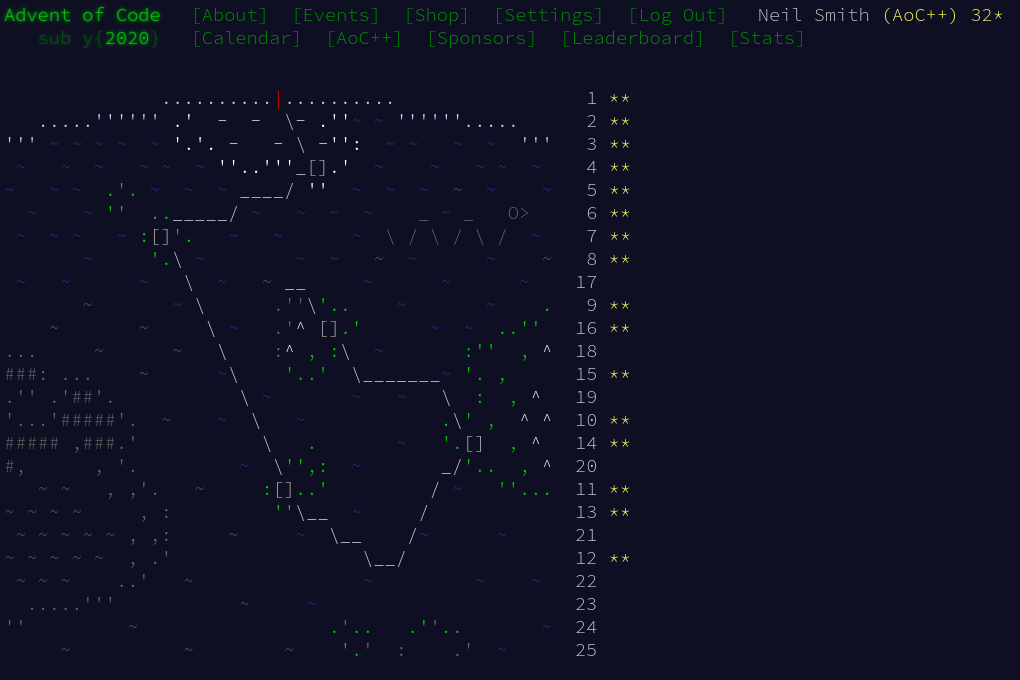 I took more of an "engineering" approach to Day 16 than a "pure programming" exercise. A few minutes fixing some data structures made the first challenge (parsing the input)  easier, and a look around Haskell's extended library eased the challenge of part 2.

The input looks complex to parse, so I spent some time thinking about how to represent the data in a form I wanted.

That's three sections: a bunch of rules, my ticket, and a bunch of nearby tickets. Some data structures to hold these:

Now I know what I'm creating, parsing the input file follows the data types. The overall input is a triple of (rules, my ticket, nearby tickets), with the sections separated by blank lines. The rest of the parser is fairly readable, assuming you know the applicative operators.

This worked first time! It says something about the ease of using this style of parser.

Going back to using these rules, checking that a value is in a range, and passes a rule, are straightforward.

Given the apparatus above, part 1 is almost trivial (as I think it was supposed to be). I define a function for testing if a value is valid for any field, and use that as a filter over all the values in the nearby tickets. Using a list comprehension is, I think, a clear way of doing the two levels of iteration.

This is, fundamentally, a constraint satisfaction problem (CSP): find an assignment of column indexes to field names, such that all values in the column match the field's rule, and no two columns are assigned to the same field. Luckily for me, Haskell's libraries contain a CSP solver. It even has an example for solving Sudoku, a larger problem than this one.

That left me to express the problem in terms the solver could understand, and use the results to solve the problem. The steps are:

A ticket is valid if every value is valid for some rule.

A column is a possible match for a rule if all values in that column match the rule. I can find all the canddate column indexes for a rule by maping that test over all the columns (zipped with the indexes).

I find all the columns that match for all the rules by mapping possibleColumns over rule. This is where I filter out the invalid tickets, and transpose them to have a list of columns rather than a list of tickets.

I now have, for each rule/field name, a list of column indexes that it could match. Time to engage the CSP solver! This code is lifted straight from the library's documentation. knownCols does the wrapping and unwrapping of data to feed solveColumns.  solveColumns takes a list of candidate sets, creates a CSP variable for each one, applies the "all different" constraint (by enuring that all pairs of variables are different), then finds oneCSPSolution.

Now I know which column index goes with each field, I can build a ticket as a Map of name:value pairs.

Finally, I put it all together, extract the information about the "departure" fields, and return the result.