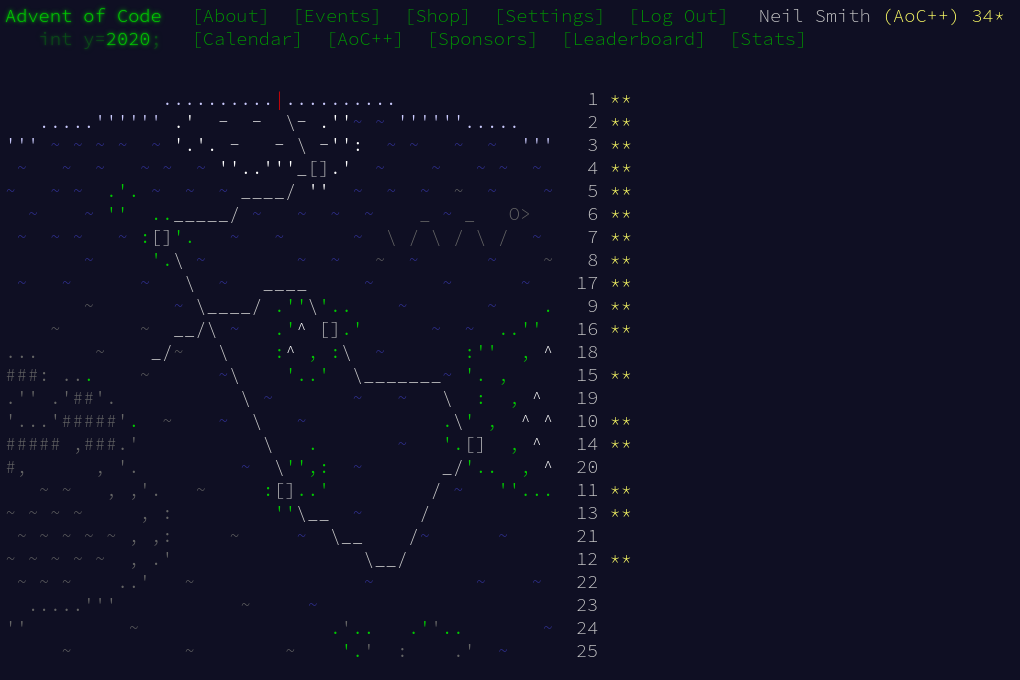 For day 17, I drew on last year's Advent of Code, mainly day 12 (for typeclasses) and day 24 (for running the cellular automaton).

First up, data structures. I chose a V3 vector from the Linear library to represent a position, and a Set of them to represent the active cubes.

Reading the grid is iterating over all cells in the grid, filling the set of active cubes as we go.

To update the automaton one step, I check every member of the grid to see if it survives. I also find the "empties", the inactive cubes adjacent to an active cube, and check if any of them become active.

Both the rule, and the indentification of the empties, require finding the neighbours of a cell, and possibly counting how many neighbours are active.

Finally, the simulation runs by iterating update and dropping the unneeded states.

This is exactly the same as part 1, except on a 4-d grid rather than a 3-d grid. The only parts of the code that explicitly refer to the dimensions are the grid construction, and the generation of the neighbours. It seems very wasteful to replicate all the code just to use different functions at the bottom of the call stack.

Polymorphism to the rescue!

Rather than having Coord as a concrete type, I use it as typeclass, with instances for the 3-d and 4-d cases. I split the neighbourSpaces function into two parts: the mapping of (here ^+^) and the creation of the set of neighbourCells of the origin.(I also need to define a new operator, ^+^^, to add Coords.)

The rest of the code stays the same, apart from the use of the new operator in neighbourSpaces and a few changes in types to use the new class.

Finally, I need to convert the 3-d grid originally read into a 4-d grid.

The simulations are the same, apart from the dimension conversion.