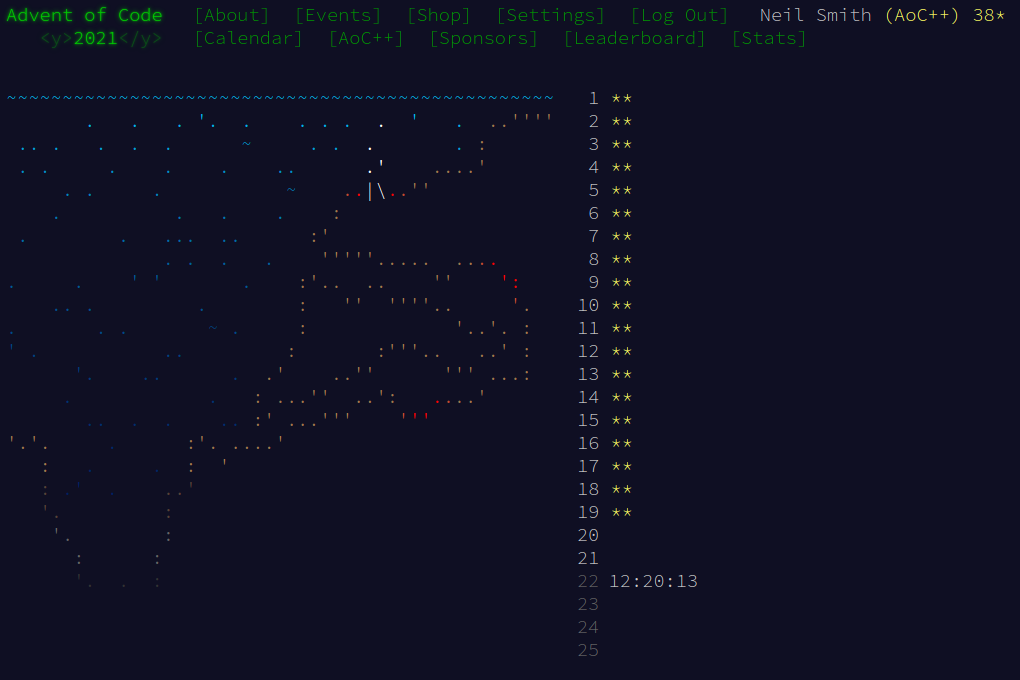 Did you know that rotations and translations are endomorphisms in 3-space, and form a monoid under composition? It really helped me solve day 19.

Let's unpack that statement a bit. The problem is all about transforming points (beacons) in a three dimensional space, with those transformations being rotations and translations. I define a transformation as being a function that takes a point to another point in 3-space. Because both the input and output of the functions are points in 3-space, the transformation is an endofunction and an endomorphism (its domain and co-domain are the same).

Using beacons and transforms, a Scanner holds information from the data file. I use a list of beacons rather than a set, as I'm using that list as a monad later on.

Each scanner also holds the transform that's been applied to it, and a signature for ruling out scanners that can't match. The signature is something I picked up from many others' solutions. For each scanner, find the distances between all pairs of beacons. Those distances are invariant under rotation and translation. If there are 12 beacons that match between scanners, the distances between those 12 beacons will be common. The signature is the (multi-)set of distances of all points. If two scanners share \( \frac{12 \times (12 - 1)}{2} \) common distances, there's a chance they may match. If they share fewer common distances in the signatures, they can't match.

Parsing the scanners involves a bit of processing at the same time, such as calculating the signatures.

vagueMatch is shown here, as we're talking signatures at the moment.

The final part of the solution is matching two scanners and finding the transform that does so.

The basic idea is is:

All this repeated "pick an item from a list" suggests using lists as monads to represent the non-deterministic nature of the process (the beacons and rotations are chosen arbitrarily).

The process will return the same transformation multiple times (if it exists), once for each pair of beacons that end up matching. listToMaybe tidies things up for me.

The final steps are simple, given the reconstructed scanners. Part 1 is just the union of all the sets of beacons. Part 2 uses the stored transform to find the position of each scanner (transform the origin in the scanner's frame to the scanner-0 frame), then finds the greatest distance between all pairs.