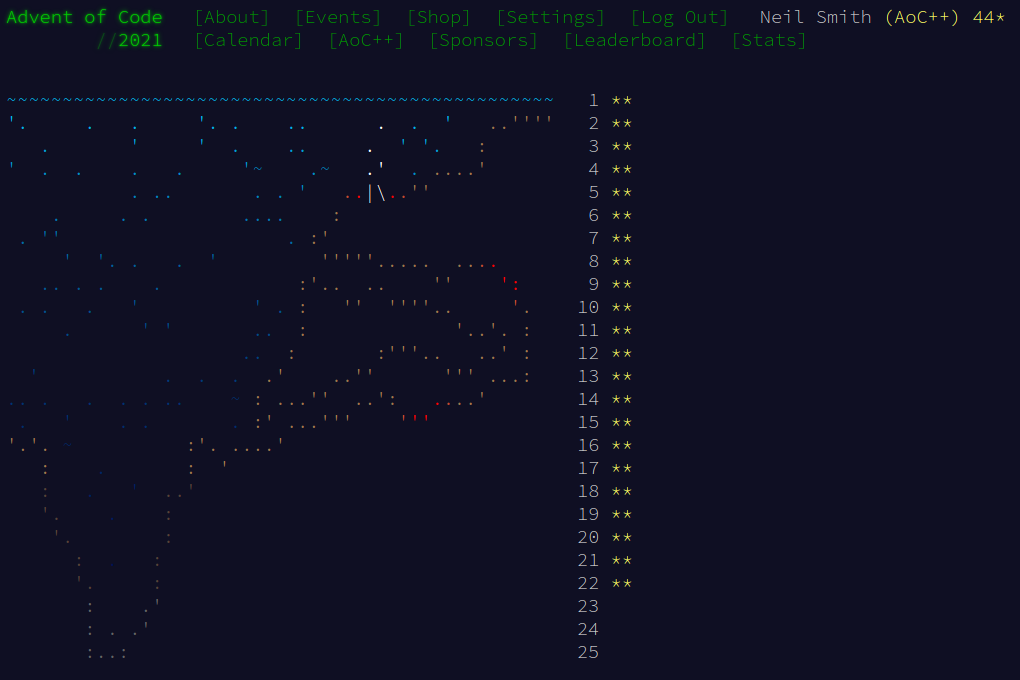 Day 22 was one where a bit of investigation around the subject paid off.

My original thought was to maintain the property that each voxel could be a member of at most one active cuboid. That would mean, at the end, I only had to add up the volumes of all the remaining cuboids. If two cuboids intersected, I would split the existing cuboid into (up to) 27 cuboids and remove the fragments that were entirely contained within the new cuboid. (There was also going to be some faffing around with removing zero-volume cuboids.) That would have worked, but there were a lot of fiddly cases to take care of.

As I was looking into how to find intersections of cuboids, I came across the idea of sweep line algorithms, and realised those would solve all my problems!

In this case, I don't bother keeping track of intersecting cuboids. All I need to keep track of is the order of application of cuboids, and the value of a voxel is the value of the most recent cuboid that contains it.

The clever part is how those scans are optimised, to avoid doing repeated work that I know is redundant. That's easier to explain with some diagrams.

The diagrams below show two slices through the space in the first example in the puzzle description. They only include the cuboids that intersect the y-z plane that that x value.

Most of these examples, the small cuboids mean that I end up examining most of the voxels individually. But when the cuboids get larger, I can skip more voxels as the sets of cuboids remains constant.

The basic data structures for cuboids are fairly direct translations from the problem. A Cuboid is a record of bounds, parity, and time (the order in which it was applied. Note that I'm using lenses for this, as there are some reasonably verbose chains of accessors to get to parts of this structure.

There are a few utility functions to help the sweeping. straddles takes a lens (an axis) and a value, and returns all cuboids that contain that value on that axis. events takes some cuboids and an axis, and returns the positions of interest for the sweep to investigate. Finally, isActive returns whether a voxel is active.

Sweeping in each dimension is the same. (I could probably combine the functions with some higher-order trickery, but I think it's probably clearer to keep them separate.)

I'll start with the z sweep. Assuming we're working with a given x and y, and are given only the cuboids that straddle both those coordinates. I find the events, pair them up into regions, then find out how long each region is. segmentSize does the length calculation, returning 0 if that region was most recently turned off.

This now makes part 1 harder than part 2, because I have to filter out all the "non local" cuboids in the input.