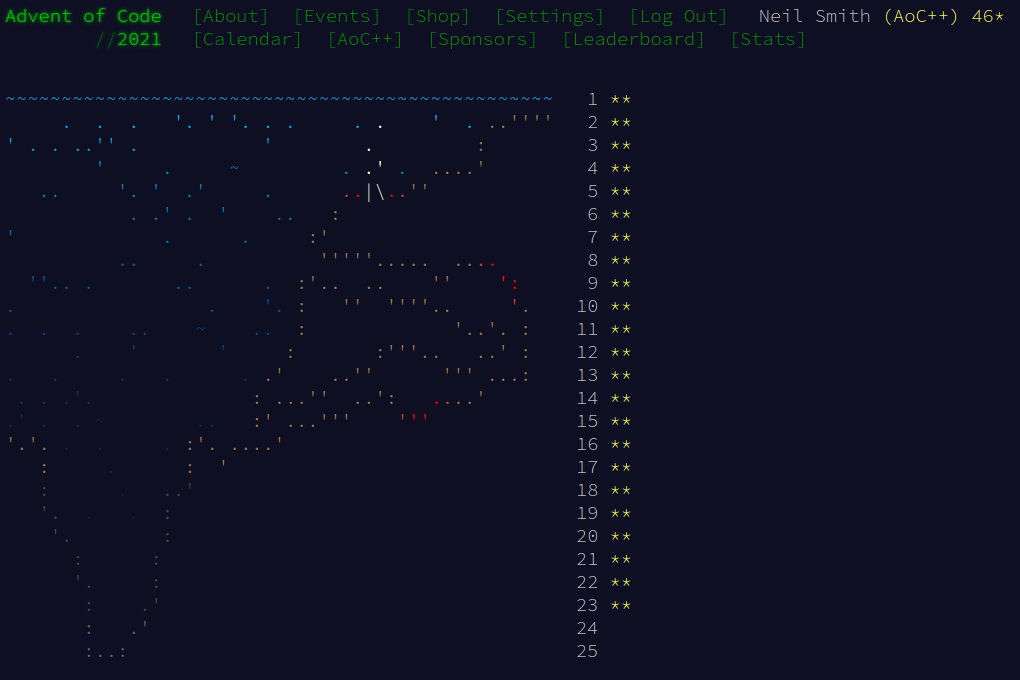 The solution to day 23 was the longest program so far. At 320 lines of code, this solution is 50% longer than the next longest (day 15, another search problem) and twice as long as day 16, the longest non-search solution. The program was long because it had to contain a lot of domain knowledge about the problem setting.

Fundamentally, the problem was similar to many previous ones. The arrangement of amphipods in the burrow represents a state, and there are legal moves that transform one state to another. The problem is to search the space of legal move sequences to turn the initial state into a goal state.

I'd normally handle this by allowing each amphipod to move one space and just allowing the search tree to become deep. But in this case, the additional rules on movement meant I had to take a different approach.

The problem has a constraint that, once an amphipod stops in the hallway, it can't move again until it enters its destination room. I could have handled that by expanding the notion of a problem state to include tracking which amphipod, if any, was currently moving. Instead, I decided to pre-compute "moves" a being the whole trail from start to end, and keeping those moves as atomic.

This meant there were three types of moves:

Including the room-room moves eliminates some duplicate search states if there are several hall spaces between the source and destination rooms. It doesn't matter which one is used to break the journey from room to room, so I eliminate that choice by including them all in one move.

The other piece of domain knowledge I included was ensuring that when an amphipod enters a room, it always moves to the furthest available space. All the spaces must be filled eventually, so it makes little sense to have unfilled spaces at the far end.

Amphipods and positions have explicit types, and the position of the amphipods is wrapped in a MoveState. I also rename the lenses for the V2 constructor, as I'm using (row, column) coordinates.

A Step is a single valid move of an amphipod, including the distance travelled and the spaces moved through; the latter is used to check there's nothing in the way of a move. Steps relates the starting position (the key) with the set of final positions.

An AppliedMove combines the positions of amphipods after a move and the Step that got there.

Finally, a Burrow holds all the possible Steps and information about where the hall and rooms are. That gets fed into the Reader monad, for use inside the search routines.

mkBurrow reads the text from the input file and returns the Burrow (including all the moves) and the initial arrangement of amphipods. Mainly it's just walking over the text file, pulling out bits, and recording their positions.

The interesting part comes in mkRoutes. It finds all the moves of each separate type (as described above) the combines them with M.unionsWith.

(As a little note to self, I spent a fair bit of time running in circles updating the various Maps without using S.union to combine the multiple sets for each key!)

The other types of route creation follow a very similar pattern.

Most of the search is standard A* search. The interesting bits are the problem-specific parts.

successors finds all the legal applied moves from a particular arrangment of amphipods. It does that by, for each amphipod, finding all the legal moves of that amphipod.

legalSteps finds the legal moves by finding all the moves (allSteps = steps ! here) then filtering out the illegal ones over several stages:

It's A* search, so it's guided by a heuristic. The one I use relaxes the constraints of "can't pass through other amphipods" and "only one amphipod per space in the destination room".

It may not be much, but it's enough to halve the runtime of the program.

My first attempts at this took several minutes to run part 2. This seemed like too long a time. I profiled the code and found that 96% of the runtime was in legalSteps (which wasn't a huge surprise). But the profiler, by default, works at the level of functions, so didn't give me any more detail than that.

I manually inserted some additional call centres at all the filter stages of legalSteps, with annotations like {-# SCC freeSteps #-}, like this:

That showed that most of the time was spent finding the freeSteps. On a hunch that GHC wasn't bright enough to cache the result of M.keysSet state, I pulled that out into a separate named variable:

Just that halved the runtime.