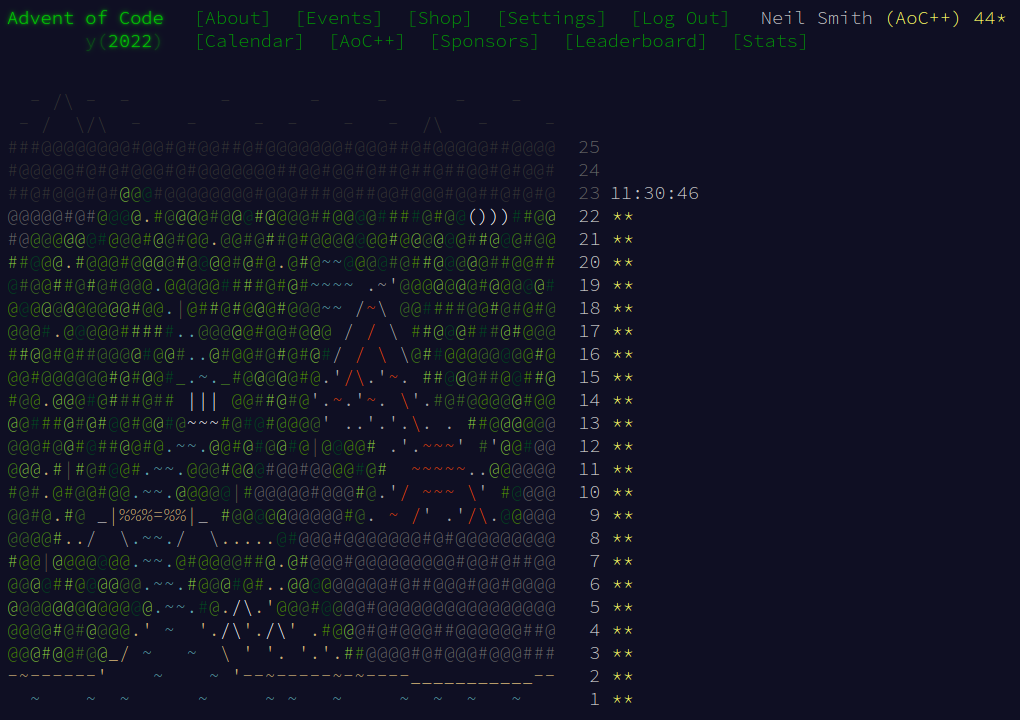 I cheated somewhat and noticed people talking about the different embedding of the map for part 2 (a torus in part 1, the surface of a cube in part 2). That meant I started by thinking about how I could make the embeddings be carried into the depths of the code, so I wouldn't have to change much between parts.

In the end, I settled on a Reader monad to store both the map and a function to find the next space ahead. As the notion of "ahead" changed in the two parts, I could move between embeddings by changing the function placed into the Reader at the start.

Most of this was direct translation from the problem description into Haskell, with my typical perchant of making things explicit rather than reusing generic data structures.

I chose to represent the map as a Map of Position to what was there (the Cell), giving a sparse structure of just the elements in the map. A Person knows about both their Position and Direction. predW and succW are versions of pred and succ that wrap values around, just what's needed for turning on the spot.

The reader is there to be threaded through the computation. As well as holding the map itself, it also holds a function for showing what's ahead of a person, given that "ahead" can change between embeddings, and the direction of "ahead" can change as the person goes around corners of the cube.

The niggle here is that finding what's ahead requires two stages: first to get the relevant function, then evaluating that function. I feel there should be a way of combining them into one step, but I couldn't figure it out.

This is where it gets complicated. For most moves, the "easy" step is just one position across the map, in the same direction. But for the two embeddings, the "next" cell changes.

For part 1, the toroidal embedding means finding some combination of  first or last cell in the same row or column, depending on where you're leaving the defined positions. Note the extensive use of lens operations to find the positions I need. I find all four positions, relying on Haskell's laziness to only evaluate the one I need.

With the cube embedding, things became more verbose. Of course, I needed a paper model to keep track of all the changes in position and orientation.

The core function isn't too bad: find which face you're on and, if needed, use the crossEdge function to cross the cube's edge. This changes the position and the facing of the person.

Finding which face you're currently on is a series of checks of row and column positions, using the inRange function from Data.Ix (some lines omitted for brevity).

crossEdge is a hard-coded bunch of rules, each of which deals with one combinaton of face and direction of crossing. See the code for all the gory details (many lines omitted for brevity). The only concession to understandability is the interp (interpolate) function that handles the arithmetic of mapping one range of row or column values to another.

This was a problem that involved a couple of nested structures and lots of small modifications to those structures. This is where lenses start to become useful. The use of operators may make some of the code useful, but the elegance of expressing the notion of "the first cell that exists on this row" makes up for it. This is an example where lenses worked well.