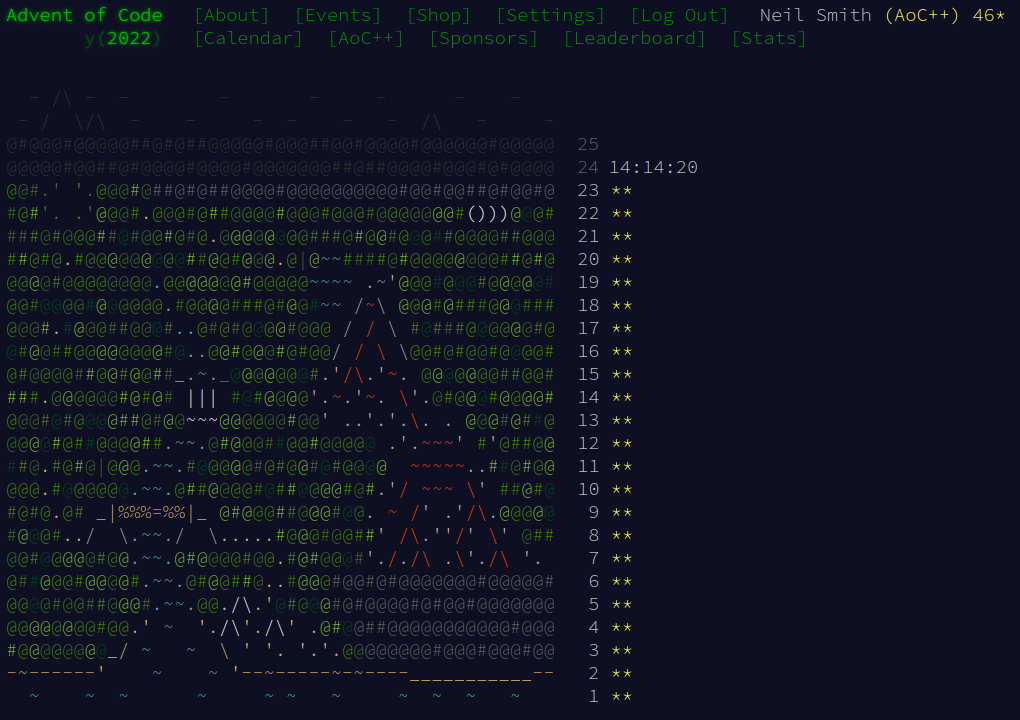 Day 23 was the first cellular automaton type puzzle of the year. Every time these come up, I consider implementing it as a Representable-powered Comonad of elements, and every year I decide that I've neither the time nor the brain capacity to build one. But one year I will!

My first decision was how to represent things and keep track of the simulation state. Some decisions were simple: the grove was represented sparsely, as a Set of Elfs. Each Elf knew its position and where it was moving to. The Grove overall knew about the elves, and also kept track of the current Directions for elf movement (an infinite, cycling list) and the simulation generation number.

(I used a custom Show for the Elf, so I could see the direction the elf was proposing to move in. It made checking my code much easier., and used the helper directionOfElf)

I was in two minds as to whether to use a State monad, or just pass around a set of Elves. In the end, I went with the State monad.

Note that none of the simulations return a value. I extract what I want from the final state, and run the simulation with execState

I split each simulation round into five stages:

The top-level is simple: get the grove (a.k.a. set of elves), get the direction priority list, then ask each elf in the grove to propose where they want to move to.

makeProposal asks a specific Elf to propose where it will move next. If it's isolated, it stays still. Otherwise, it checks if it can move in any of the four directions, then there's a horrendous bit of plumbing to find the first viable move.

(isolated and noElves are described below.)

proposedStep takes and elf and a direction, and returns a Maybe Elf if the elf could move in that direction (i.e. there are no elves in the "interfering" region).

The plumbing fromMaybe elf $ getFirst $ mconcat $ fmap First $ fmap (proposedStep localElves elf) directions makes use of the First class for monoids. Starting from the end, the fmap  turns the list of directions into a list of Maybe Elfs. The fmap First converts each of these Maybe Elf into a First (Maybe Elf), ready for the mconcat. That combines the elfs into one blob, and getFirst extracts the first non-Nothing element of that blob. If there are no viable moves, getFirst will return Nothing and fromMaybe will return the original Elf.

I hope all that makes sense!

Removing "clashes" is less complex, but still fiddly. I define a "clash" as when two or more elves are trying to move into the same space.

The basic code is simple enough: find the elves about to clash, then ask them to stay still.

I find positions of clashes with a MultiSet. First, I put all the proposed next positions into the targets multiset, then create a new MultiSet from targets, keeping only the targets that appear more than once. (I have to use foldOccur to do this as there's no filterWithOccur or similar functions in the library.) Finally, I convert the contested targets into a Set

Then I ask the elves no to clash. That's as a map over the elves, where each one is asked to notClash.

notClash checks if the elf's proposed move is in the set of clashes. If it is, the proposed is reset to current (meaning the elf doesn't move this round). If it's not a clash, the elf remains the same.

Finally, asking the elves to move is simple. I just update each elf's current position to be the same as its proposed position.

There are quite a few utility functions to support all this.

First are a few direction-processing functions. anyNeighbour returns a set of the eight neighbouring positions of the origin. directionNeighbour does the same, but only the three positions in a certain direction. stepDelta is the position change in a particular direction.

Those three functions all generate relative positions. translateTo converts them to absolute positions, given a start point.

notElves is a predicate that returns True if there are no elves at any of the specified positions.

This all worked without too much trouble. Unfortunately, it took a very long time to execute, around 18 minutes on my machine to complete the 1000-odd rounds.

This prompted me to pull out the profiler for the first time this Advent of Code. It revealed that about 95% of the runtime was spent in noElves, which meant it was spending all the time performing the set intersection between the few positions and the many elves.

The fix was simple enough. In makeProposal, I cache the elves near the current elf, and use that small neighbourhood to check for the presence of elves.

That small change was enough to reduce the runtime by two thirds. A six minute runtime is pretty bad, but there weren't any other quick fixes I could see.

I also tried defining custom Eq and Ord implementations for Elf, so that only the current position was checked. That had just about no effect.