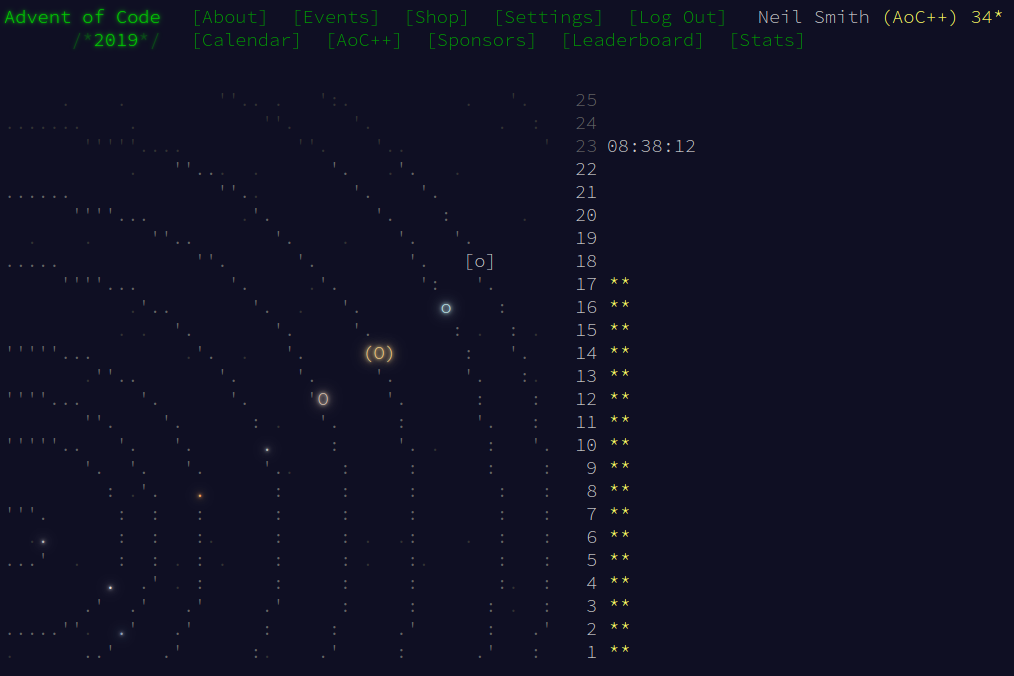 Day 17 was a challenge of two very different parts. Part 1 was a simple parsing of some Intcode output. Part 2 was about finding a lossless compression, including finding your own dictionary.

This was relatively straightforward: run an Intcode machine, use its output as an Ascii-coded text file to build a Scaffold data structure, then look for some interesting points.

I created a ScaffoldBuilder to hold the state of the scaffold, the robot on it, and where I was in the scaffold creation process.

Building the scaffold was a foldl' on the machine's output. addGridChar keeps track of the current row and column to use for adding the next piece of scaffold.

A point is an intersection if it has a piece of scaffolding in all four directions. I found the intersections by taking each point, imagining what these four neighbouring scaffolding pieces would be, and checking whether all those pieces are in the scaffold.

Note how isIntersection is partially applied in the S.filter function.

This was a lot more involved. The basic approach was:

The first three steps are combined in findRoutine:

A quick look at the map (rendered into Ascii-art) indicated that the robot should move forward as far as possible, and there was only one option for turning at each point. In particular, it seemed likely that the most compressible route was for the robot to pass over each intersection.

But how to implement it?

I used the same ScaffoldBuilder structure to track where the robot was on the scaffold. The notion of transforming a object into a list of steps is an unfold operation, and that's what I did.

takeStep pulls out a few parts of the current ScaffoldBuilder and checks if there are scaffold elements ahead, to the left, and to the right of the robot. Depending on those checks, the next step is either F, CW or ACW. If there's no valid step, takeStep returns Nothing and the unfold stops.

This uses the same wrapping versions of pred and succ I used in day 11.

This is much simpler. The code exploits the fact that there are no U-turns in the map, so the only repeated steps are F. toCommands groups similar Steps and toCommand turns each group of Steps into a single Command.

Compression is dictionary-based compression, where we have to create our own dictionary. The puzzle statement gives a few other constraints:

I handled the "20 character" limit by building a custom show and showList functions for Commands. (I was inspired by ephemient's post). That means I can show a bunch of commands then directly find the length of their representation.

showList took a bit of thinking about, as it uses a difference list for efficiency (and they're not quite the difference lists I'm used to from Prolog).

For finding the compression, I took inspiration from gedhrel's solution and used the list monad to explore all possible compressions, using the lists for non-determinism.

The constraints above mean that dictionary entry A is some non-empty prefix of the commands, entry B starts with the first basic command after the initial As, and entry C takes what's left.

The core of the compression takes place in the compress function. tail $ inits commands gives all non-empty prefixes of commands. The guard statements ensure that the dictionary entries valid; they're evaluated as soon as possible for efficiency. compress will find all possible Routines: in my case, there was only one valid solution.

The replace function replaces a dictionary entry with its label and onlyBase and friends check that lists of commands contain (or don't) the base commands.

After all that, converting the routine into the numbers to feed into the Intcode program is almost trivial, even if I do have to convert from Int to Integer.

Finally, I take the output of the machine, display the scaffolding map it produces (complete with human-sensible-prompts!) and the amount of space dust collected.

The whole thing is available to look at, and on Github.

I'm somewhat bemused why this puzzle was Intcode based: the map wasn't too large, and the puzzle solution could have been judged by the lengths of the various parts of the compressed instructions.