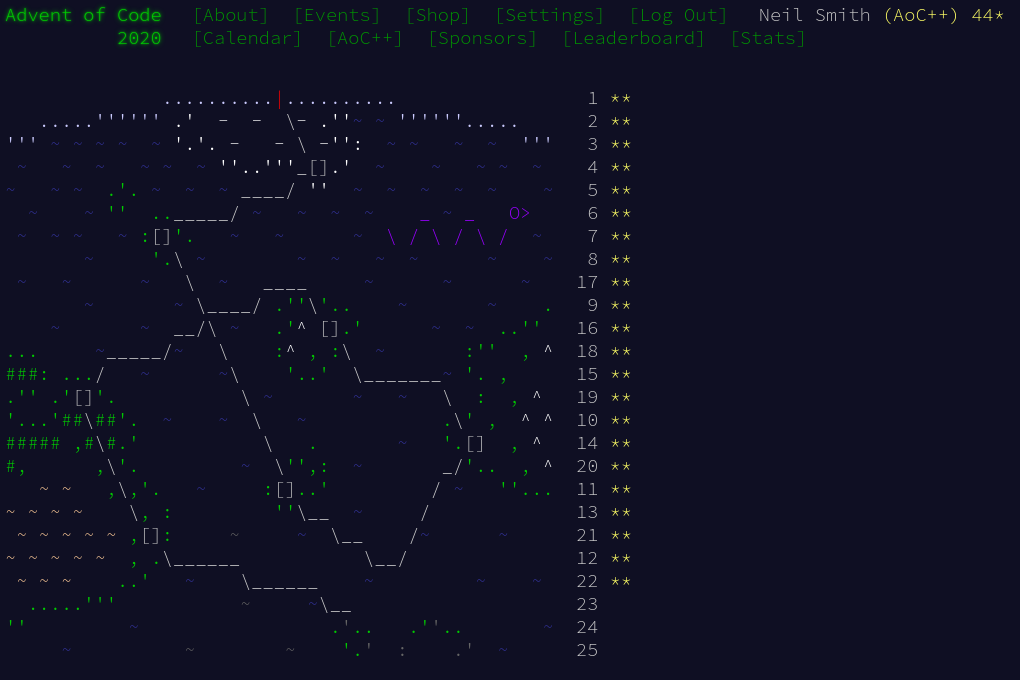 Day 22 was a chance to show off the Sequence library, a fast and easy-to-use implementation of double-ended queues.

I start by parsing the input into a pair of Sequences of cards.

I put those together with the standard until function (found with Hoogle) to play the game.

That's it! There's a bit of post-processing of a game to extract the winning score.

I found the explanation of the recursive game a bit confusing, especially the behaviour around detecting repeated states. Imagine a sequence of games where there's a main game, which calls a recursive sub-game A; after that returns, sub-game B starts.

But with that, the implementation of the recursive game end up being a fairly mechanical translation from the description. Each game terminates with a notification of the winner and the winner's deck.

That worked, but execution took a bit longer than I wanted. Profiling the runtime showed the program spending about 50% of its time inserting new games into the cache. I would leave things there, but Justin Le has a neat solution using hashes which I thought I'd try.

The idea is to have a hash table as the cache and generate a hash from the game state. The hash should be quick to generate and quick to test for membership. The hash table is a Map from hash values to Sets of game states. If the hash is not in the cache, we can't have seen this state before; we should add both the hash and the singleton set of this game. If the hash is in the cache, we can check the associated set for the definitive answer; if it's not there, we should add the game to the set.

That brings the runtime down to about 1.8 seconds.