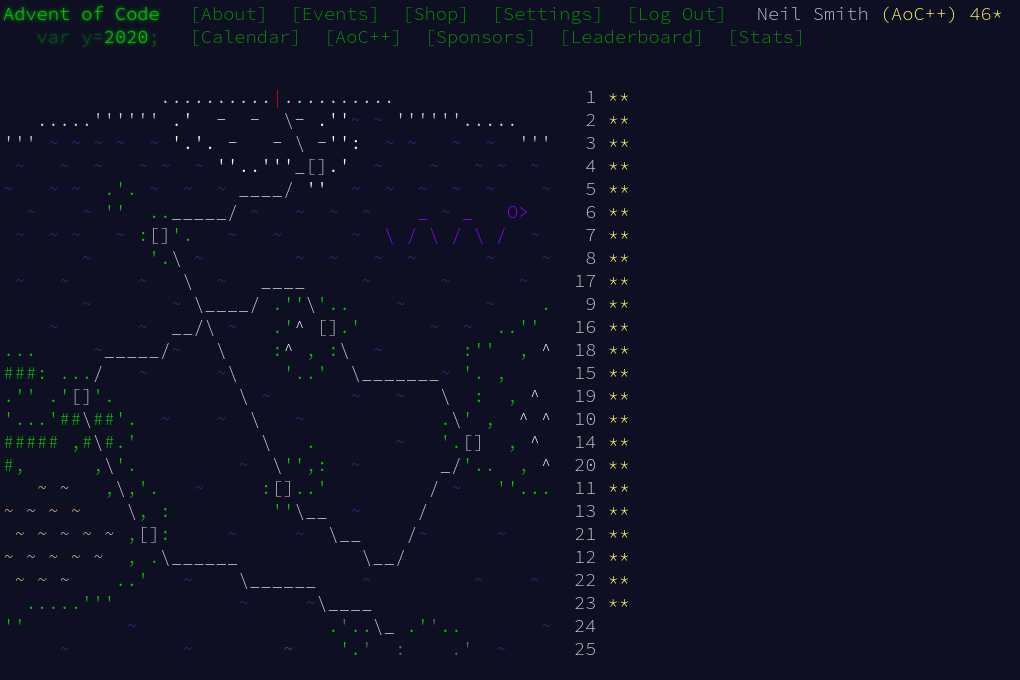 Day 23 is one where the the obvious approach works fine for the small problem in part 1, but doesn't scale to the larger problem in part 2. But I think it's interesting to cover both, so this is a post of two parts.

This uses an obvious representation for the circle of cups, a circular pointed list. This is an example of a zipper, a data structure with one element picked out as a focus. In this case, the focus of the pointed list is the current element. Functions like previous and next move the focus, and you can insert and delete elements from the list. This is a natural fit to the "circle of labelled things" in the problem.

I needed to remove and re-insert three items, so I quickly whipped up takeRight and dropRight functions to help that.

I also needed something to find valid destinations

The main "play one step of the game" function is a fairly direct translation of the steps into code, inserting deleting and shifting as needed.

Finally, a bit of plumbing to connect the input to the solution

This scaled up from ten cups and one hundred rounds to one million cups and ten million rounds. A pointed list wasn't going to cope. But as all the moves were "what's the next cup around the circle", a circular linked list would be enough, if I could make the pointer updates happen in a mutable structure (much like day 15). It's easier to work through the updates, and the intermediate pointers needed, with an example.

I start with the cups after the first move of the example. Given the current cup, I can pick the first held cup and the first cup after the held ones.

Then I do the other pointer updates. Destination now points to held, and the last held cup points to the cup after the destination.

If I neaten that up a bit, I show the result after the move, ready for current to move on one cup.

Now I know what I'm doing, I just need to implement it. First, I need to decide on a data structure. Each cup has an index and a pointer to the next cup, and that's all. That suggests using a Vector, where the contents of cups[i] is the next cup from cup i. The state at in the last diagram above would be like this:

I also saw a suggestion (from somewhere) that keeps things a bit neater. Vectors have zero-based indexing, but I want to use one-based indexing for the pointers. I can repurpose cups[0] to be a pointer to the current cup.

After all of that, the code for each game step update follows from the description.

There's also a bit of setup to create the initial vector then run the game.

It takes about 1.8 seconds to run both parts.