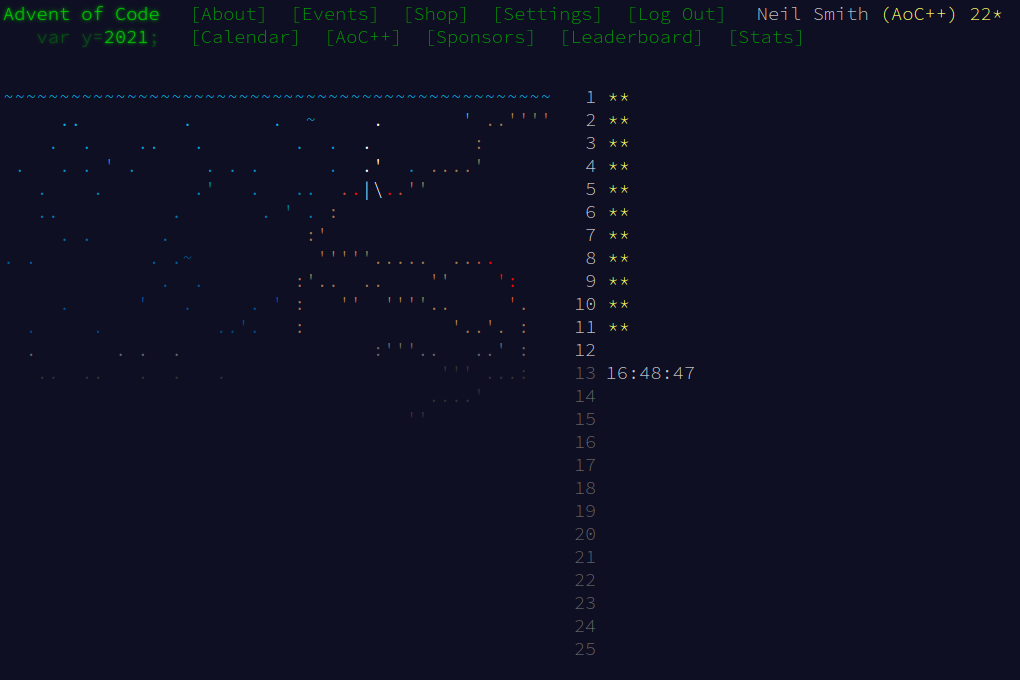 The key thing in day 11's puzzle was being clear about what was happening so I didn't get caught in an infinite loop.

What I had to ensure was that once an octopus had flashed, it wasn't prompted to flash again by its neighbours going off. That meant I needed to store two bits of information for each octopus: it's energy level and a flag for whether it had flashed.

The octopuses are stored in an IArray of points, much the same as day 9.

Simulating the octopuses was done with iterate , generating an infinite series of steps paired with a running total of flashes so far. Part 1 pulls out the requested step from the sequence, part 2 keeps going until every octopus has energy zero.

Each step does the following for each simulation step:

The flash function is where the bulk of the problem lies. It gets fed an agenda of octopuses where we need to handle each one's flash and its after-effects. Note that not every octopus in the agenda need flash, but we need to check what happens to it.

When we get an octopus in the agenda, there are three cases:

In this third case, we set the octopus's flashed flag, increment the energy of every neighbour, and add all those neighbours to the agenda.

This process will terminate as we only ever set the flag, and ignore octopuses with the flag set. Eventually, we'll run out of octopuses to process. It's only after we've counted the number of flashes that we reset all the octopuses to having zero energy with cleared flags.

It also doesn't matter how high an octopus's energy gets: we only care if it's above 9. That allows us to handle the case where an octopus has multiple neighbours going off.