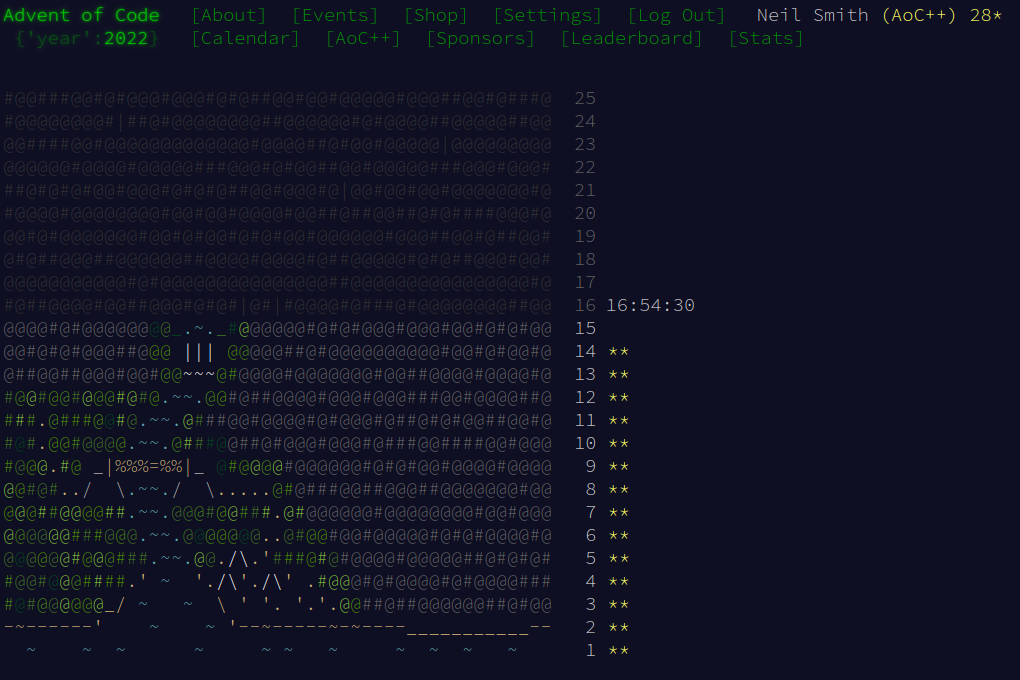 Day 14 was more about finding a good representation for the problem than hard algorithms.

Positions were again represented as V2 Int objects, with the format like V2 x y. The cave complex was a Set of Positions, showing the occupied spaces in the cave. The input showed the initially-occupied spaces, with more spaces occupied as the sand piles up.

I parsed the input into the straight-line segments, then used those in some folds to add the "stone" spaces. Note the use of range from the Ix class to yield all the spaces in the segment.

I started at the lowest level I could, simulating one step of the movement of one grain of sand. What it does depends on whether the sand is falling, where it is, and the type and position of the floor.

If it is Falling towards an Open floor, and is now below the level of that floor, we can call it Escaped. Otherwise, I look for the places it could fall to (in priority order) and move the grain to the first of them that's vacant, where the grain is still Falling. If there are no vacant places to fall into, the grain becomes Blocked.

If the grain is Falling towards a Closed floor, the process is similar. However, rather than checking if the grain has escaped, I define a vacant space to be one that has no sand or stone, and is above the implicit floor level.

Given the motion of one step of one grain, I can find where a grain ends up by calling fallStep repeatedly. That's what fallsTo does, reporting either where the grain is Blocked at rest, or that it's Escaped.

dropManySand uses that return value to drop all the sand until nothing changes. That's when either the start position is occupied, or a sand grain has escaped.

All that's left is to put the parts together, by starting the simulation with the apporpriate floor and counting how much more is in the cave after the simulation has finished.